TRY OUR ONLINE DESIGN PLATFORM TO CREATE A SELL PRODUCTS OF YOUR CHOICE WITH NO COST, RISK OR HASSLE! START SELLING 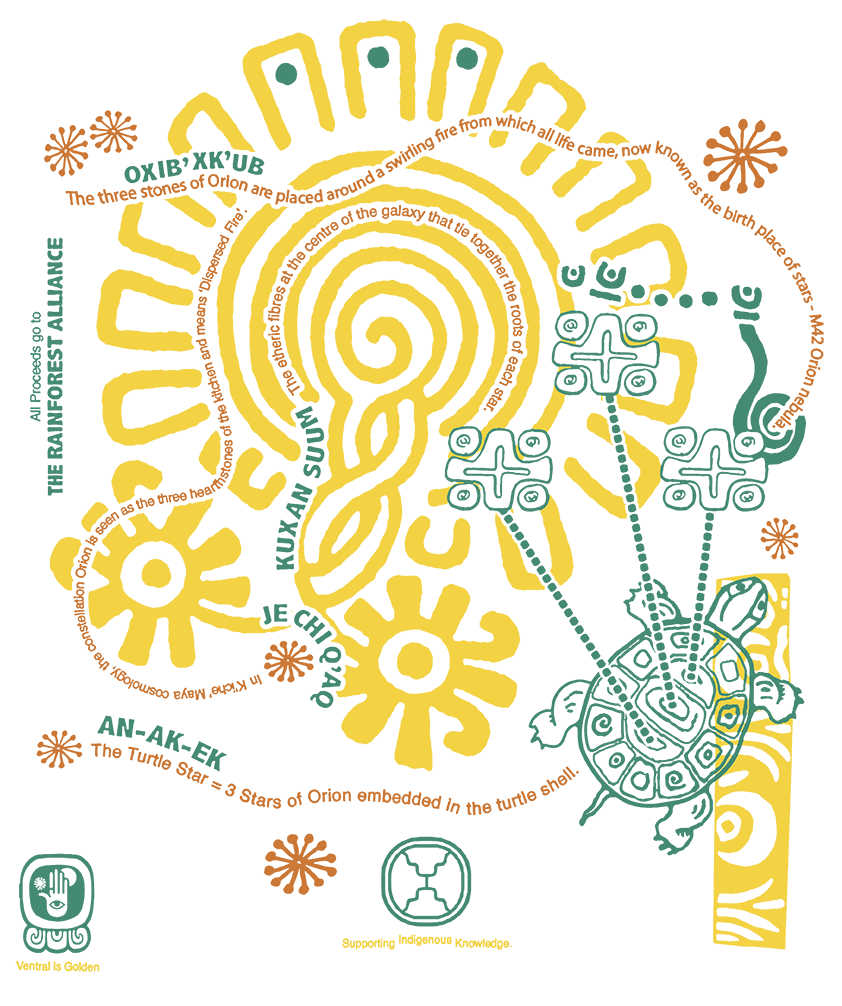 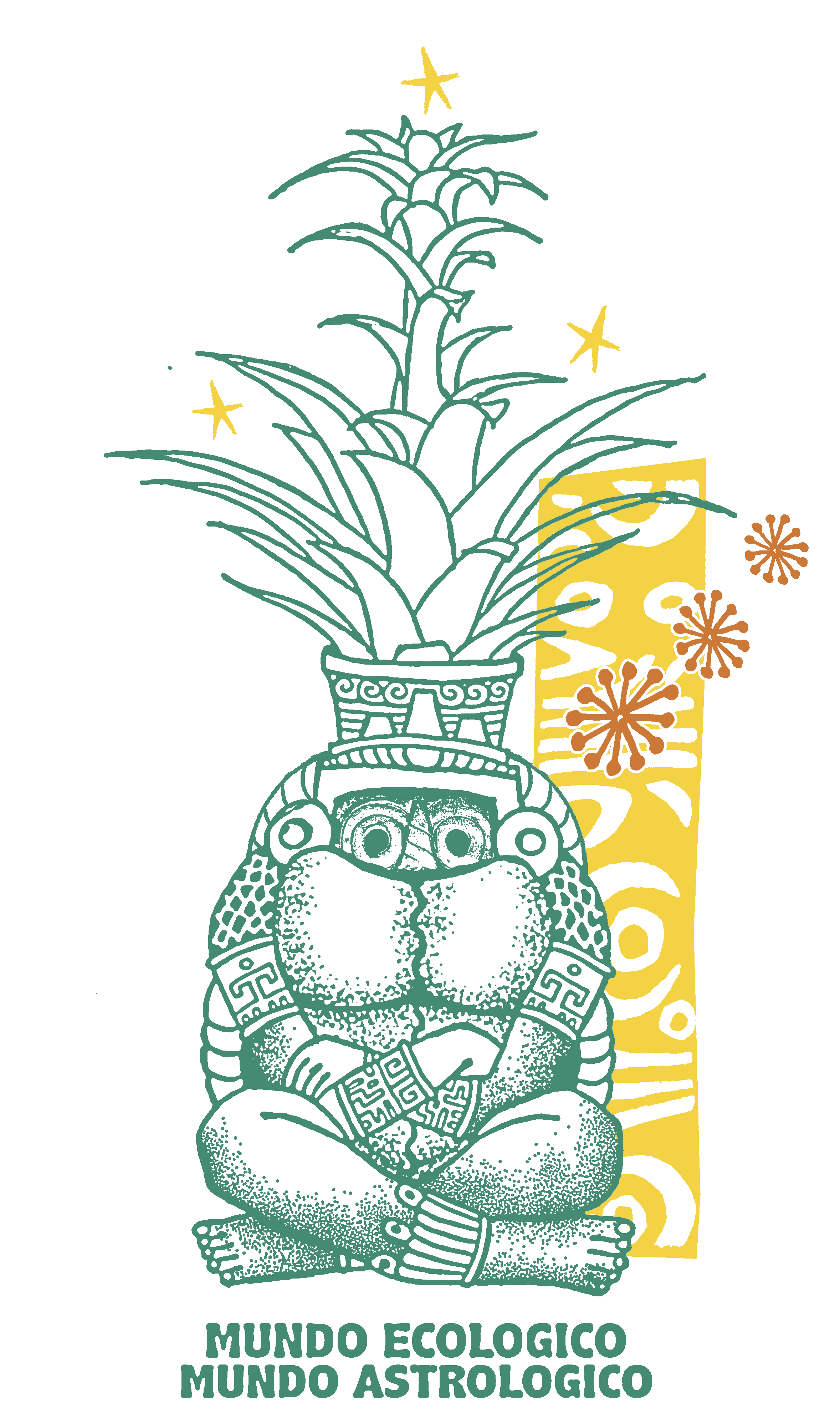 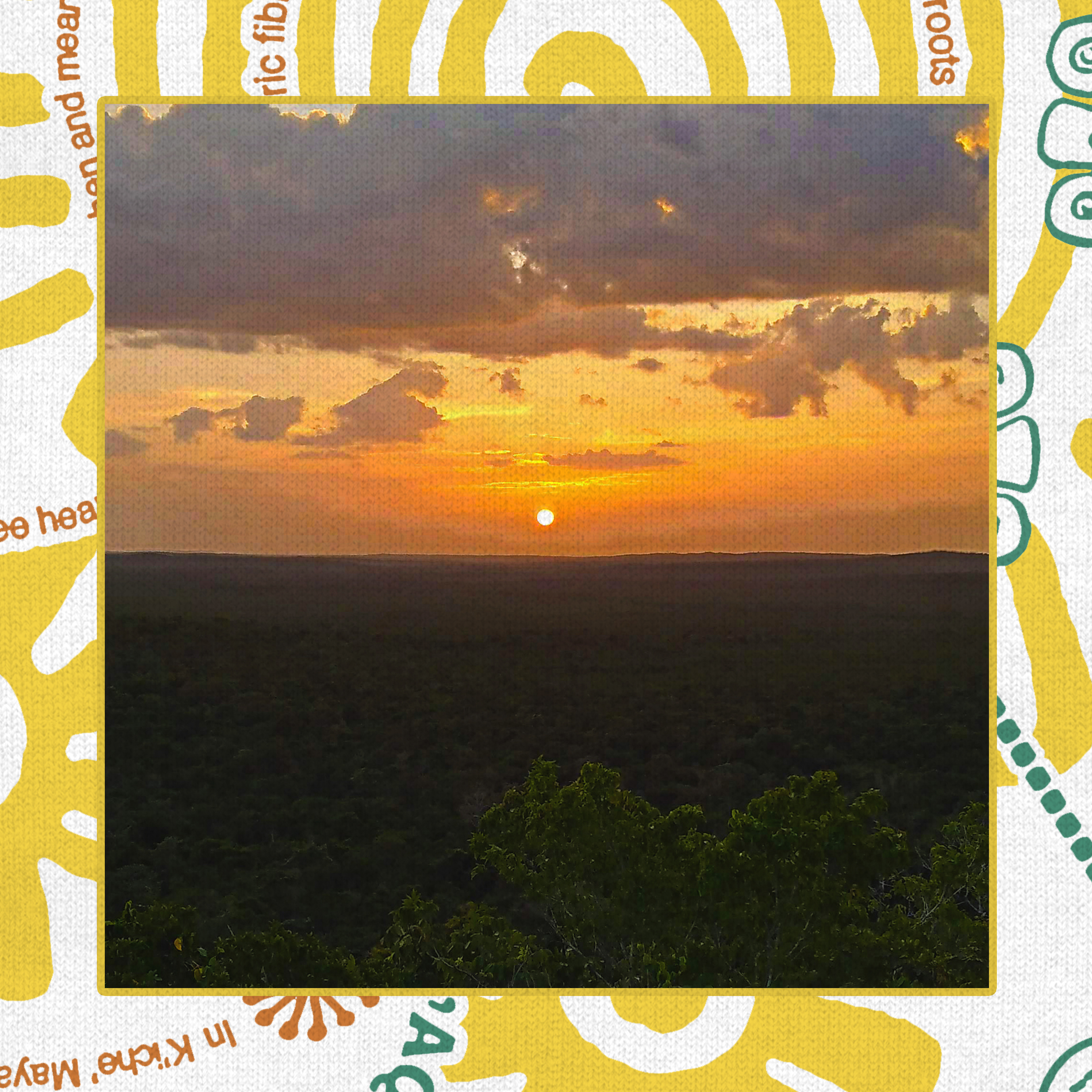 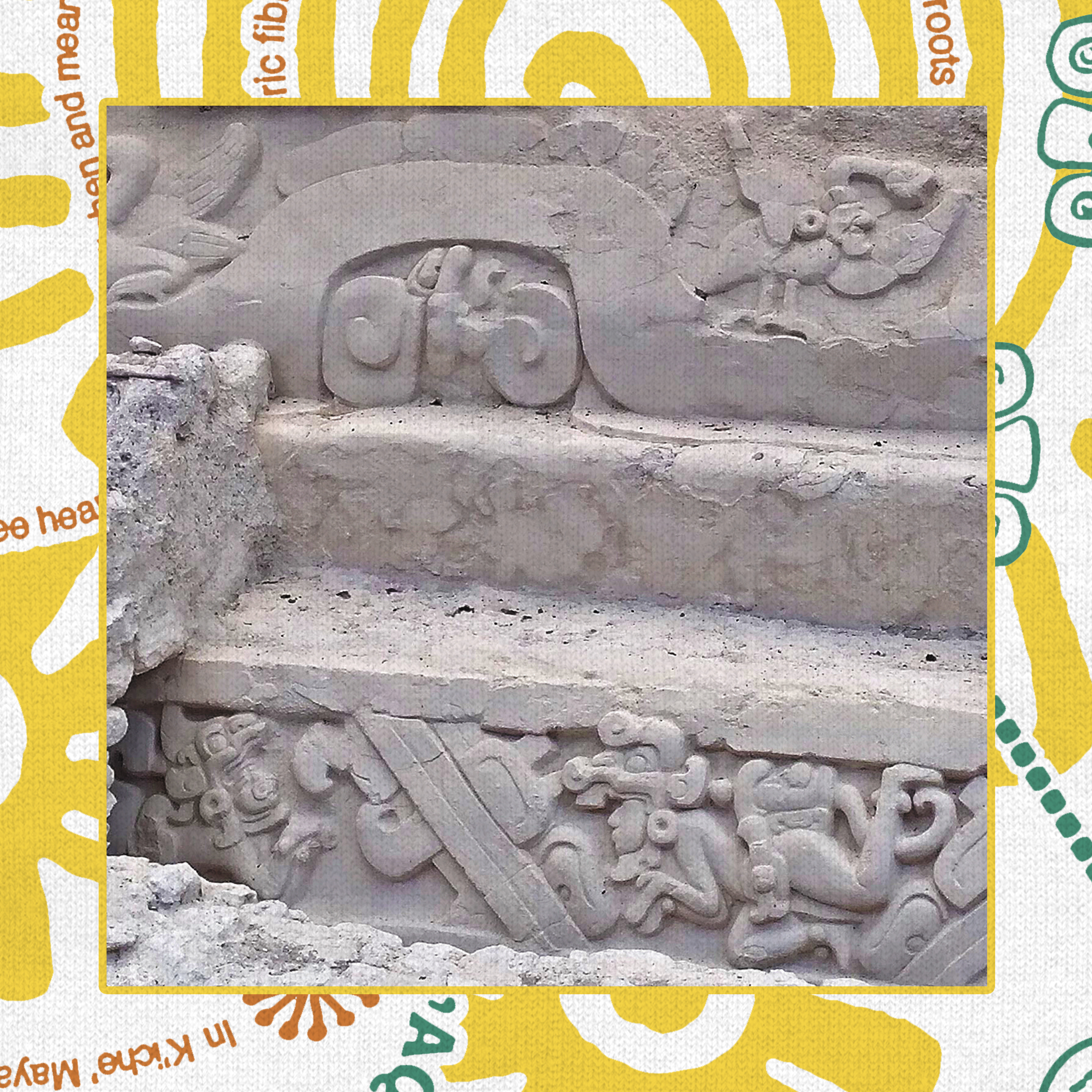 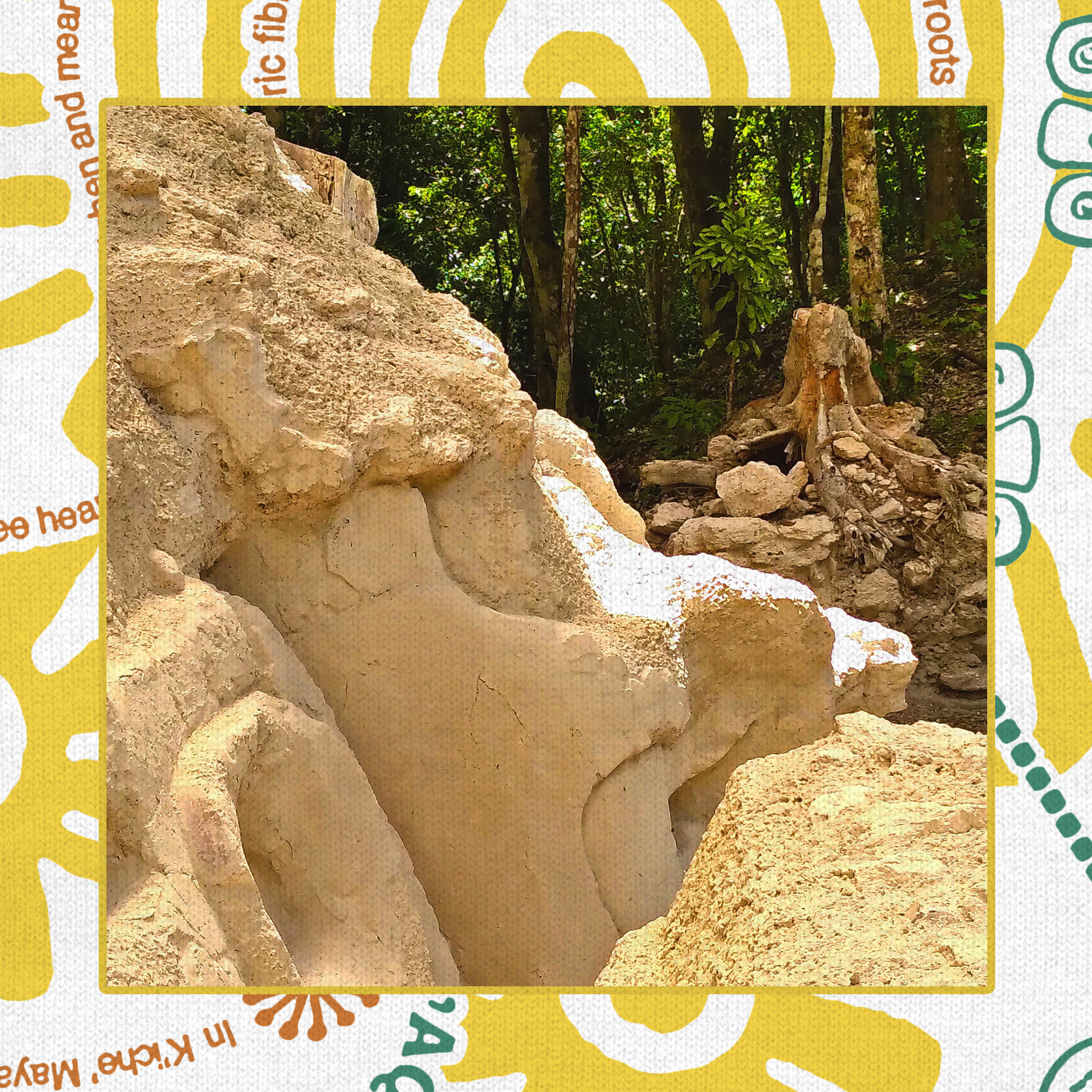 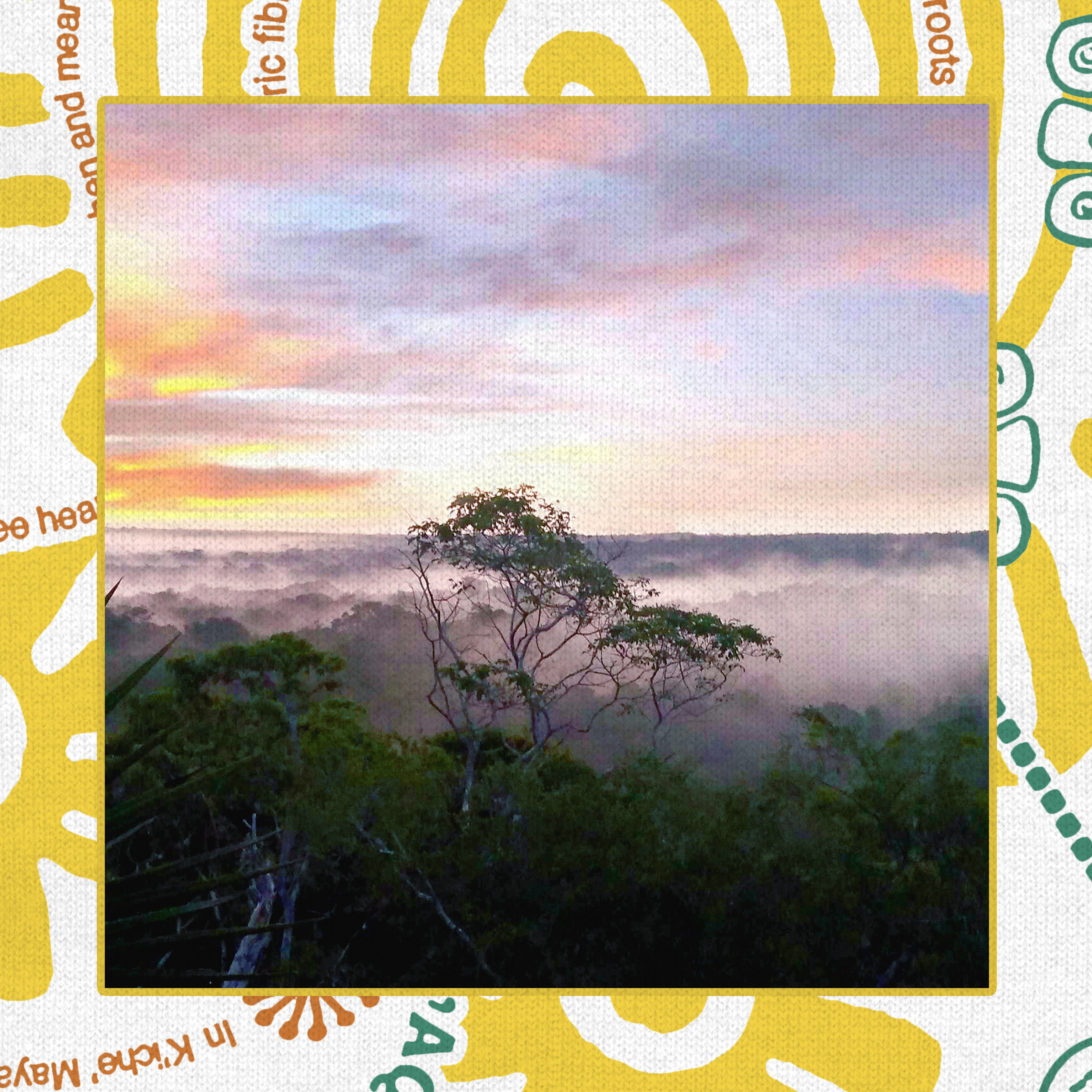 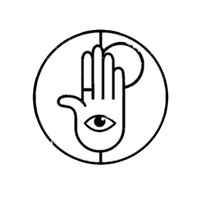 All proceeds go to the Rainforest Alliance.

▲ The Turtle Star is an astrological sign of the Mayan cosmology and is reflected in a symbolic style of architecture as seen on top of many Mayan pyramids. The turtle shell is seen symbolically as the world’s landmass, and in the creation myth, this landmass is cracked open so that humanity can re-emerge from within.

▲ Inspired by a five day hike through the tropical jungle of northern Guatemala, I reached one of the biggest archaeological sites of the Mayan Pre-classic era (2000BC - 250CE). It is a site that has implications regarding current ideas about human history, as there is a general conceit that civilisations couldn’t flourish in the tropics, and El Mirador, alongside the discovery of nearly 60,000 previously unknown Mayan structures, debunks this conceit.

▲ The hike was organised through Carmelita, a traditional Maya community cooperative from Peten, who have protected 54,000 hectares of land through a government concession, overseeing the conservation, management and ecological extraction of natural resources.

▲ El Mirador was considered one of the largest city states of the Maya, supporting upwards of one million people at its peak. It is situated in the Maya Biosphere Reserve (which protects 2.1 million hectares of tropical forest of the Peten department). It is the heart of the Maya Selva region, which covers 4 million hectares of forest, spanning Guatemala, Mexico and Belize.

▲ The current situation at El Mirador regarding its preservation is a peculiar one. Lead archeologist, Dr. Hansen seems to be lobbying to legally redefine this region of the Maya Biosphere Reserve from El Mirador to Calakmul in Mexico, with the intention of privatising the land in a series of misleading claims about the factors that currently threaten it. One such factor is the prospect of deforestation. However, since the guardianship of the forest was given over to the local communities (who rely on the forest for their livelihoods) deforestation has seen a 0% increase. This fact seems to suggest that the current archaeological plan discredits the ability of the indigenous people to manage their own land.

Although the surrounding areas are threatened by industrial scale deforestation, the site at El Mirador seems to be more at risk from a new legal status that will move power away from the local communities and into the hands of private stakeholders who plan to turn the area into a ‘disney-style ecotourist resort’.

▲ Protecting the forests through continual support and funding for local management schemes, like the one currently in use in Guatemala, will ensure that the rights of the local people and their traditional methods of cultivation will remain protected and properly represented. It is not merely our task to preserve the natural habitats that nurtured this ancient knowledge into existence, but to ensure that the architectural, astronomical, botanical, spiritual and other such achievements of ancient civilisations remain alive, and are not simply reduced to objects of a museum-model of the world, that favours private, economic interests above all else.

▲ Through my own research I have found that the Mayans and earlier Olmec cultures were part of a much older civilisation, advanced in their own right, that shared cultural and technological links with ancient Sumerian, Egyptian, Indian, Chinese and Polynesian cultures, in a view of history not permitted by our current understanding of the rise and fall of civilisations. One small piece of evidence to quantify this is the symbolic use of the turtle in Mayan, Native American, and Indian mythology, its relationship to Egyptian and Dogon cosmology, and how the Mayan people used vantage points and pyramidal structures within their habitats to observe the stars in order to formulate their precise calendrical systems, which are still in use today by many rural communities.

▲ An Ak Ek - means 'The Turtle Star' in Kʼicheʼ Maya, one of the twenty one mayan languages currently recognised inside Guatemala. The turtle features prominently in the Mayan creation myth, as transcribed from the only remaining source of Kʼicheʼ Maya literature, the Popol Vuh. It has been astrologically placed as the equivalent of Gemini / Orion, and the three stars named Alnitak, Saiph, and Rigel are embedded in its shell. These stars form an almost perfect equilateral triangle in the sky and are mirrored in the placement of the three structures on top of the pyramids at El Mirador and at other sites in meso-america. The positioning of the three hearthstones in the Kʼicheʼ Maya kitchen are a direct acknowledgement of this ancient understanding of the stars and their function. At the centre of the hearthstones is a swirling fire, now recognised as the M42 Orion nebula. In the Kʼicheʼ Maya language, Orion is known as ‘Je Chi Q’aq’, which means ‘Dispersed FIre’.

▲ It is my quiet hope that this project will raise funds for the continual support of well regulated forest preservation initiatives, primarily for ecological reasons, to encourage a general interest in astrology and symbolism, and to show how the sacred knowledge we seek to preserve must remain in the hands of the indigenous people who still actively participate in it.

▲ Thank you for your support and interest. If you’re interested in the context of this situation, please visit the following links:

Rainforest Alliance, The Secret to Stopping Deforestation in Guatemala - https://www.rainforest-alliance.org/in-the-field/community-the-secret-to-stopping-deforestation-in-guatemala/

Teena Clipston, The Fight for the El Mirador Basin - https://teenaclipston.com/dr-richard-d-hansen-and-his-fight-for-the-el-mirador-train-and-wilderness-area/

THE SELLER HAS CHOSEN TO DONATE 100% OF THEIR PROFIT TO "Rainforest Alliance"
Campaign Ended
5 sold, this campaign has gone to print!

Additional garments from the same campaign cost £1.50 extra for UK deliveries and £2.00 extra for international deliveries.

We aim to print and ship garments within 10-15 working days from the end of the campaign. Due to supply issues this can be longer.

For international orders customs charges are not included at checkout and any fees will need to be paid on arrival to you local postal service.