☉ ABOUT THE DESIGN ☉

Considered a highly evolved folk pharmacology, Ayahuasca (also known as Uni amongst the Yawanawá tribe) is active in humans only through a binary mixture of plant species. This presents a mystery to anthropologists as to how, in such a densely diversified environment as the Amazon rainforest, the plant’s healing properties were able to be discovered.

It is a strongly held belief, across many indigenous cultures, that the emergent patterns and motifs contained within the Ayahuasca vision are the underlying connective geometries that unite nature, mind and body. This archetypal symbolism (found across all continents and encoded within the mythology of religions) has demonstrated a living knowledge of molecular and biological processes, often later forming a basis for modern medicinal research and generating insights into the structure of DNA.

When asked how they attained this sacred knowledge, indigenous shamans often reply…

“The plants told us”.

As well as having the ability to treat psychological and physiological illnesses, Ayahuasca has also been used for centuries by experienced, indigenous shamans as a way of communicating with ancestral spirits. As early as 1905, the active alkaloid present in the plant was given the name ‘telepathine’ because of it’s noted ability to affect group mind and open dialogue directly with the environment.

☉ WHY ITS IMPORTANT ☉

During the most recent pandemic, it is essential that New World industrial societies bear witness to their inbuilt capacity for destruction. As a growing body of research shows, virus outbreaks and natural habitat destruction are inextricably linked.

In Brazil’s most western region, in the state of Acre, the Yawanawa tribe live almost in total isolation in an attempt to preserve their spiritual practices from the physical threats posed by industrialisation. It is an all too common theme of historical expansionism that has seen countless indigenous communities decimated by colonialism under the guise of social, industrial and scientific progress. Deforestation and forest fires also continue to compound the desperate situation for South America’s indigenous communities.

Ayahuasca (literally meaning Spirit Vine) plays a key role in the Yawanawa cosmology, medicine and art. By preserving their cultural heritage, their accumulated botanical knowledge is not only kept alive for future generations, it is also prevented from becoming further marginalised within current socio-economic models of industrialised society.

☉ WHERE THE PROFITS GO ☉

All profit goes to the Yawarani village of the Yawanawá tribe in the Brazilian Amazon to help support with basic supplies and medical aid (both western and indigenous) with the overall aim of reaching sustainability in isolation from the current Brazilian government.

It is essential that the inevitable process of acculturation doesn't see the sacred knowledge of Ayahuasca migrate away from it's origin.

In addition, 5% of each sale will also be donated to the Uk based homelessness charity, Crisis.

☉ The Cosmic Serpent: DNA and The Origins of Knowledge, by Jeremy Narby.

☉ Food of the Gods: The Search for the Original Tree of Knowledge, by Terrence McKenna

Campaign Ended
17 sold, this campaign has gone to print! 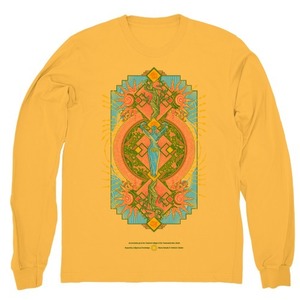 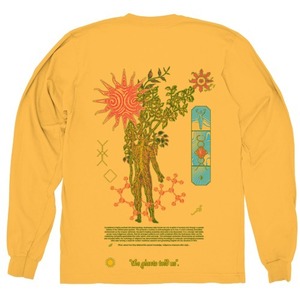 We aim to print and ship garments within 10-15 working days from the end of the campaign.